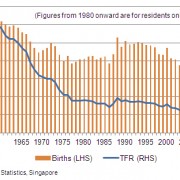 Singapore’s resident total fertility rate (TFR), or the average number of births a hypothetical woman can expect to have by the end of her childbearing years if she experiences the age-specific rates in a given year, has been well below the replacement level (generally considered to be 2.1) since 1976. Singapore has one of the lowest fertility rates in the world, together with Hong Kong, China; Japan; Republic of Korea; and Taipei,China (United Nations 2009). Our projections (Institute of Policy Studies May 2012) show that if the TFR remains constant at 1.24 births per woman from 2005, Singapore’s citizen and permanent resident population (known collectively as the “resident population”) will decline from 2020. Read more.