Vinod Thomas is Director General of the Independent Evaluation Department at the Asian Development Bank. Prior to his appointment in August 2011, Thomas held various senior posts at the World Bank, including Chief Economist for Asia and Director General of the Independent Evaluation Group. He formerly lived in Brazil as Country Director for the World Bank, wrote a popular book entitled From Inside Brazil.
Author Archive | Vinod Thomas Environment 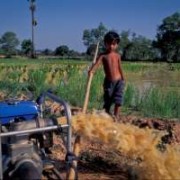 Striking rates of economic growth notwithstanding, 550 million people remain hungry in the Asia and Pacific region, 65% of the population has no safe piped water, and more than 600 million people live without electricity. Overcoming these problems requires a combined approach in which food, water and energy are treated as a nexus, rather than as separate, standalone issues, which has too often been the case in the past.
Comment