Dr. Mustafa Moinuddin is a policy researcher at the Institute for Global Environmental Strategies in Japan. He holds a PhD in International Development Studies from Yokohama National University, Japan, and received the Master of International Law and Economics degree from the World Trade Institute, University of Bern, Switzerland. His research interests include energy trade and market integration, sustainable economic development and transition to green economy, regional cooperation and integration, and international trade.
Author Archive | Mustafa Moinuddin Industry and trade 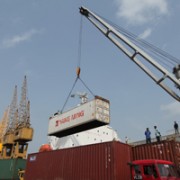 Thanks to its sustained economic growth over the last several decades, Asia has become the world’s most dynamic region. Maintaining this impressive growth rate, however, requires market integration to ensure the free flow of goods, services, and capital across borders (ADB 2013). Indeed, interplay of market forces and increased participation in trade have been decisive in the growth of emerging Asian economies. Until now, most of Asia’s final goods have been exported to Europe and the United States. Access to large markets allowed Asian countries to exploit their economies of scale on the one hand, and stimulate growth in their productive sectors on the other. With the rise of Asia, it is time for these countries to cooperate and become an integrated market of their own.
Comment