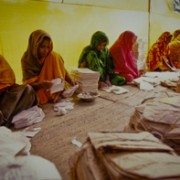 Grameen Bank (Village Bank) in Bangladesh is the world’s most well-known microfinance institution. It lends $1.5 billion a year to 8.4 million people. The establishment of Grameen Bank shows that we do not always have to accept the systems we are given. Sometimes we have to think the impossible if we are really going to change the world. My first venture into such small-scale lending was not carefully thought out or based on any previous research; rather, it was an instinctive response made when I came face-to-face with gross injustice. In 1976, I was teaching economics in the port city of Chittagong in Bangladesh.
Comment