Ed Wilson has been president of the Economic Society of Australia, NSW for the last five years and is associate professor at the University of Wollongong, Australia. His research interests are in macroeconomic modeling and empirically estimating the determinants of economic growth and productivity and the consequences of policies to reduce poverty in Asia.
Author Archive | Ed Wilson Population 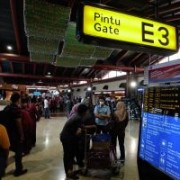 While there has been strong promotion of free global trade in goods and services as well as in capital inputs, the case has not been made so forcefully for increasing the international mobility of the other factor of production, labor. A recent article in The Economist, Free Exchange—Border Follies, surveys the latest research on the potential benefits of increasing international labor migration (The Economist 17 November 2012). The estimates are staggering, with possible increases in world output and income ranging from 30% to 100% (amounting to an additional $20 trillion to $70 trillion) depending on the level of migration assumed. These calculations swamp the potential benefits of increasing international trade, which is estimated to be less than 3% of global output. The research shows that the gains come from migration-induced productivity increases in the host country and the additional incomes are more than sufficient to compensate for any adverse effects, for example, if wages for some host country workers fall in the short term. Remittances (worth around $300 billion a year) are also sent to the migrant source countries to compensate those who stay behind.
Comment