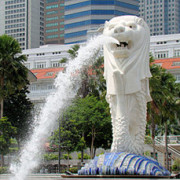 Singapore has regularly reported considerable surpluses in its annual fiscal budget. Budget surpluses have been an essential part of the country’s growth strategy (Asher et al. 2015) as they are perceived to provide a signal of sound public sector financial management to foreign investors, key stakeholders in Singapore’s development planning. Budget surpluses also enable the corporate income tax rate to be kept among the lowest in the world, at 17%. Other policies—such as having a relatively large inflow of foreign workers that depresses at the lower end and almost no taxes on most forms of capital gains and domestic interest income—contribute to the high share of capital income in national income at around 55%, with labor’s share at around 40%–42%, in contrast to the pattern in OECD countries.
Comment