By Aladdin D. Rillo and Mercedita A. Sombilla. Posted December 21, 2015 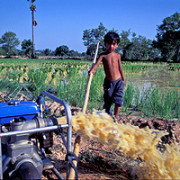 The green revolution has done wonders for Asia. Yields for most crops, particularly the region's main staple of rice, have doubled over recent decades. In the Lower Mekong Delta, considered to be Asia's rice bowl, the new technologies and crop strains that the green revolution brought were a big success.
Comment