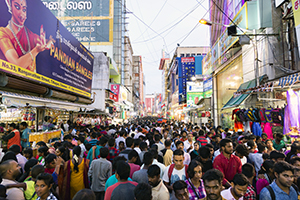 Reports from the United Nations estimate that India will add 404 million persons [1] to its urban areas between 2014 and 2050 (UN DESA 2014) and that it will have seven cities [2] with a population of more than 10 million by 2030 (UN DESA 2016). Currently, India is making an ambitious effort in its urban transformation under the “Smart Cities Mission” of the Union Government. With the guidance of the Ministry of Housing and Urban Affairs, India’s urban local bodies (ULBs) have been proactively working to achieve better efficiency and equity in the utilization of financial resources for developing municipal infrastructure. They have been augmenting their financial autonomy by developing data-driven and market-based financial instruments that attract investments to their projects.

With support from the United States Department of the Treasury, the Pune Municipal Corporation completed the first three-tier debt capacity analysis to predict the sustainable amount of debt it could raise over the next 15 years. It adopted several credit enhancement measures to boost its issue rating to AA+. In June 2017, the Pune Municipal Corporation launched the first and largest listed municipal bonds program in India to finance its ambitious 24×7 water supply project. It attracted more than 20 institutional investors when the first tranche of the 2 billion Indian rupees bond was listed at the Bombay Stock Exchange. The tranche was oversubscribed by over six times, with a competitive coupon rate of 7.59%.

The Ministry of Housing and Urban Affairs published on its Smartnet portal [3] the lessons learned from the Pune municipal bond launch (Kumar et al. 2018). Some of the important potential learnings for ULBs are the following: (i) preparing their financial reporting statements in adherence to the National Municipal Accounting Manual; (ii) submitting an application to the Union Government for qualifying to receive the proposed compensation of 2% interest subsidy on the total size of the bond issue; and (iii) establishing a robust compliance and grievance management framework for the bond program.

Credit rating of cities and towns is gaining momentum in the country. Stakeholders in the private sector, civil society, and international organizations are keen join hands to create an ecosystem for ULBs to access the financial market. Municipal bonds of Greater Hyderabad and Indore were listed on the Bombay Stock Exchange and National Stock Exchange of India, respectively. Other cities like Ahmedabad, Bhopal, Jabalpur, and New Delhi are proactively preparing themselves to issue bonds. With access to the financial markets, through new financing instruments such as municipal bonds, ULBs could be more successful in their journeys toward creating smarter cities.
_____