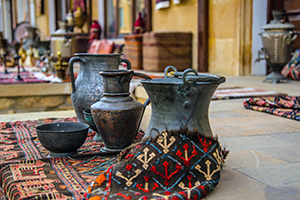 After the oil price crunch in mid-2014, Azerbaijan entered into a new stage of economic development. During 2004–2014, thanks to high oil prices, Azerbaijan achieved substantial growth rates, which were accompanied by improved social conditions and macroeconomic stability. Azerbaijan’s average annual growth rate during 2000–2013 of 11.3%1 played a key role in the improvement of the country’s international economic ranking. The country’s economic growth model, based on capital accumulation, was successful in eliminating the social and economic backwardness inherited from the Soviet Union’s collapse and imbalances from the early years of independence. However, the low oil prices made it necessary for the government to make realignments to its overall course of economic policy, which had reached its maturity.

In this context, the government commenced massive economic reforms in order to adjust the macroeconomic environment to external vulnerabilities. Among the policy measures implemented after the oil price crunch, the government focused particularly heavily on structural reforms. In the initial period of the recession, the Azerbaijan government, aiming to sustain flexibility in macroeconomic policy, paid much attention to revising the allocation of responsibilities among the various economic policy making institutions. Indeed, in this period, the structural reforms conducted by the government were mainly directed at mitigating the adverse effects of the shocks. In this regard, the changes to the laws on banks and on the Central Bank of the Republic of Azerbaijan and the creation of the Financial Markets Supervision Authority, which is in charge of conducting macro prudential policy and overseeing the banking sector, can be viewed as early reactions to the sharp imbalances in the financial sector. It is worth mentioning that the financial sector, particularly the banking system, was severely affected by the recession. Therefore, it became a priority for the government to launch its first reactions to the economic contraction by conducting structural reforms in this sector. Subsequently, the government launched reforms to improve public administration and simplify administrative procedures to maintain flexibility in institutional management and create enough space for conducting appropriate countercyclical macroeconomic policies.

The approval of the Main Directions of the Strategic Road Map for National Economy and for Core Sectors in December 2016 by President Ilham Aliyev signaled the launch of a new wave of structural reforms. Azerbaijan’s current reform agenda can be divided into three groups. The first group of reforms is of those mainly directed at improving institutional quality. In this regard, it is expected that the reallocation of responsibilities among various policy institutions in order to increase management efficiency will continue in the next few years. As President Aliyev mentioned, improving governance mechanisms as well as increasing transparency and efficiency are key priorities of the reforms conducted in this direction.

The second group of reforms is heavily aimed at supporting diversification initiatives and implementing structural realignments in the national economy, which heavily inherited its structure from the Soviet Union period. As a typical resource-rich developing country, Azerbaijan also suffers from the challenges regarding diversification of its economy. In the framework of these reforms, the government seems decisive on eradicating all challenges that might impede successful diversification. Thanks to policy measures implemented particularly during the oil boom years, the government has partly achieved development of its non-oil sector. According to the latest data for 2017, the non-oil sector constitutes 62.8% of gross domestic product.2 However, as can be observed from speeches made by President Aliyev, the non-oil sector still needs comprehensive policy measures to thrive and be competitive on an international scale. In this period of reforms, the government will probably make more effort to develop a competitive tradable sector, which has relied mainly on private sector investments rather than subsidies from the state budget.

The final group of reforms involves a revision of the role of the state in economic activity as a mega regulator and as a participant. Particularly, notwithstanding the transformation from central planning to a market economy completed in the previous decade, reforms are still needed to realign economic agents’ reciprocal relations with each other and with the state. In this context, solving problems dealing with the clear specification of property rights and improving the rule of law as well as boosting financial contributions from public asset management to economic growth is of considerable importance. Referring to the Strategic Road Map for National Economy, it seems that implementing privatization and increasing usage efficiency of state assets will be among the leading policy priorities.3

As mentioned, Azerbaijan seeks to achieve resilient economic growth and bolster diversification in the coming years through implementing massive and comprehensive structural realignments. The country’s long-term economic visions for 2025 and post-2025 can be seen as highly ambitious. Particularly, the targets aiming to eliminate resource dependence and develop a competitive non-oil sector will require substantial and continuous reforms.

However, recent experience from emerging economies have revealed that the ones that have successfully conducted structural reforms by targeting alignment in quality shifting in institutional modus operandi have achieved not only cyclical rapid growth but also medium and long-term sustainable development. In this regard, structural reform waves conducted in Azerbaijan can be assessed not only as a tactical response to temporary economic vulnerabilities but also as a complementary strategic maneuver of the country’s general economic course in the last decade.

It is also worth noting that since regaining independence, Azerbaijan has tried to avoid a “one-size-fits-all” approach, especially during the massive economic reform period of the previous transition years. Therefore, it is also predicted that in the process of shifting to a new stage of economic development, the government will pursue the same trajectory. Finally, it should be emphasized that the government’s stance toward restructuring the Azerbaijan economy, accompanied by the respective institutional management reforms, gives ground to expect that these reforms will not be episodic.
_____