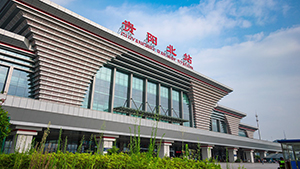 The scale of local government debt (LGD) increased in most countries after the global financial crisis of 2008, resulting in accumulated potential fiscal risk and even systematic risk. Strengthening the management of LGD to avoid risk has become a hot topic. What is the current situation of LGD in the People’s Republic of China (PRC)? Is it high risk or not? What innovations are being implemented? Are there new challenges facing the Chinese government? What are the next steps? These issues, among others, have gained wide attention around the world.

Brief review of LGD management in the PRC

The New Budget Law (2014) was the watershed that divided the history of Chinese LGD management into two stages. Before the revision of the Budget Law, local governments were not authorized to issue debt directly and mainly depended on local government financing vehicles to make up the gap between fiscal revenue and public expenditure. However, the New Budget Law allowed provincial governments to raise LGD directly and imposed that LGD can only be raised by the issuing of local government bonds. The New Budget Law also implemented and strengthened the series of rules and regulations for the management and supervision of LGD. The essential difference between these two stages was the risk assessment based on budget constraints—strict budget constraints lowered the potential risk during the second stage.

What is the current state of LGD management in the PRC?

The status of LGD management can be characterized by three words: stable, sustainable, and affordable. These are supported by three pillars.

First are the supporting data. The main ratios for measuring the risk of LGD stay within a safe range and are significantly lower than the internationally accepted alert lines. For example, the ratio of outstanding LGD to the corresponding comprehensive financial capacity in 2016 was 80.5%, which was lower than international standards. The national government debt ratio (outstanding debt/gross domestic product) in 2016 was 36.7%, which was not only lower than the European Union’s warning line of 60% but also lower than those of the major market economy countries. Second is the intuitional guarantee. The sustainability of debt at the subnational level is guaranteed by several innovations: (i) quota management—the upper limit of the scale of LGD determined by the State Council and approved by the National People’s Commission or the National People’s Commission Standing Committee; (ii) categorization management—local government general debt financing for public welfare projects without earnings and local government special debt are two legal kinds of financing for public projects with earnings; (iii) clarification of the supervision mechanism responsibilities—the Ministry of Finance is in charge of the supervision and management of Chinese LGD, whereas the National Audit Office is responsible for external supervision. In addition, the design of the risk assessment and early warning mechanisms and so on are underway.

Finally, repayment has a greater guarantee than before as local government debt financing should abide by the Golden Rule, which states that the use of local government debt should be strictly prohibited to capital projects rather than recurrent expenditures. The repayment channel is also more stable and diversified since fiscal revenue, government funds, projects earnings, and so on can be used. Meanwhile, the use of LGD has generated high-quality assets and convertible assets, which further improve the affordability of Chinese LGD management.

Besides the abovementioned policies, innovative policies for the issuing of LGD include debt-swap programs to convert the existing financing vehicle debt already recognized by authority agencies to local government bonds; building up the credit rating and debt information disclosure mechanisms; and launching pilot projects for local government special bonds (LGSBs), such as land reserve LGSBs, toll road LGSBs, and so on.

LGD management in the PRC has benefitted from these innovative measures and obtained staged achievements. The LGD investor base has become more diverse—security companies, funds, insurance companies, and foreign banks hold higher proportions of debt than before, while domestic commercial banks hold less. The financing cost has decreased, and repayment pressure has been alleviated. Meanwhile, the market size for local government bonds has grown rapidly (Figure 1). The issuance of local government bonds and outstanding local government bonds at the end of 2016 was CNY6.05 trillion and CNY10.63 trillion, accounting for 17% and 16.7% of the total PRC bond market, respectively. In short, the innovations have significantly and effectively prevented and eliminated fiscal and financial risk. 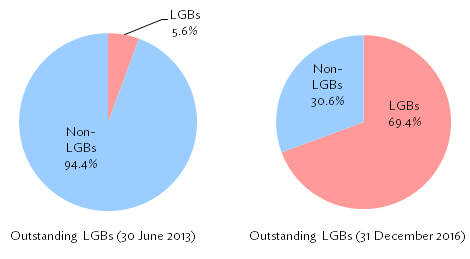 LGB = local government bonds.
Source: Author’s calculations based on data from the PRC’s Ministry of Finance.

At present, the risks from LGD in the PRC are generally controllable, but challenges and obstacles still exist. For example, some financial institutions still require local governments to provide a covenant of warranty; there are still non-standard phenomena of promising to buy back the investment principal of the social investor’s capital for some public–private partnership projects or bearing the investment principal loss of the social investor’s capital and promising the social investor the minimum revenue guarantee; and in some areas, the scope of government-purchased services has expanded illegally.

The outlook for LGD

“When the sun is shining, we should fix the roof.” There is undoubtedly a need to persist in blocking the back door and safeguarding the front door by strictly controlling the increasing volume of, and fighting against, illegitimate and illegal debt financing. All local governments should perform their debt financing by issuing government bonds, and they should also resolve to curb the implicit debt increase. To cope with these current challenges, better supervision of local government debt management, further improvement of the quota management system, and the importance of sound information disclosure and the credit rating system need to be highlighted. At the same time, the PRC should accelerate the market-oriented transformation of financing platform companies and urge financial institutions to perform the compliant and prudent operations to realistically strengthen risk control and maintain fiscal sustainability.