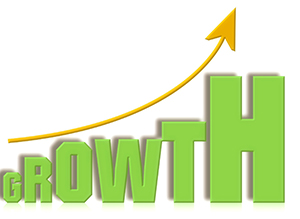 The world economy at present is in the middle of profound adjustment. Slow economic growth and obvious economic divisions are resulting in the self-fulfilling “low-growth trap”, while productivity is declining all over the world and income inequality is worsening at the country level. These trends have been interacting and blending with each other since the global financial crisis of 2008 and have triggered a vicious cycle that has become an obstacle to world economic recovery.

Why does productivity show a general declining trend?

The potential growth rates of both developed market economies and emerging market economies are declining. The International Monetary Fund has indicated that the potential growth rate of developed countries will decline from 2.2% to 1.5%, while that of emerging economies is also declining due to total factor productivity decline and is predicted to fall from approximately 7.5% before the global financial crisis to 5% between 2015 and 2020. 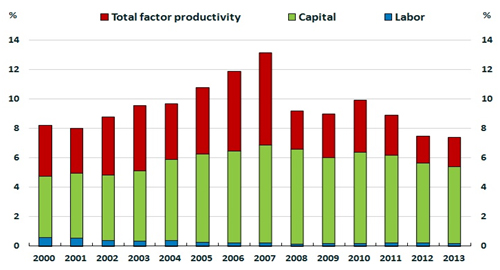 Source: Organisation for Economic Co-operation and Development calculations based on the Asian Productivity
Organization’s Productivity Database.

As for investment, the law of diminishing marginal returns to investment has played a role due to resource mismatches. Overinvestment or, in contrast, the lack of investment in some important public service fields and barriers to investment have in some areas resulted in a lower ratio of return of investment. On the other hand, the same story can be seen in investment in human resources, which has further impaired improvement in productivity.

The effects of the global financial crisis of 2008, such as high unemployment rates, debt accumulation in developed countries, the significantly increased degree of operating leverage of enterprises in emerging economies, and overcapacity, have severely hindered the revival of the world economy.

Rethinking the development concept and implementing structural reforms are the best measures for preventing declining productivity and escaping the “low-growth trap”. Economic development should focus more on realizing inclusive growth and increasing national wealth and shared prosperity rather than only on the gross domestic product growth rate. Based on this idea, methods for improving productivity must be sustainable and environmentally friendly to ensure success in achieving both sustainability and green growth.

First, policies should be matched to ensure maximum effect. Policy reform tools should be chosen carefully based on economic circumstances. Product market reform and deregulation are the most effective methods for structural reform. Structural reforms should be carried out in order of priority and urgency to promote medium- and long-term reform items, such as pension systems, medical insurance, and the labor market, while accelerating the implementation of short-term reform items with quick expected results.

Third, policies should increase investment in human capital and remove barriers to labor mobility. Increasing human capital is important for improving productivity and the health of nations. At the same time, it is also crucial for enhancing national competitiveness. In most developing countries, the priorities at present are facilitating the transfer of labor, promoting skill matching, reducing government intervention, and lowering barriers to entry for private enterprises.

Fourth, policies should promote green growth and the development of a low-carbon economy. Implementing stricter environmental policies will not impact productivity in the long run. Instead, such policies will effectively increase productivity and competitiveness by making effective use of natural resources, such as land, water, and energy, and reducing waste. Meanwhile, it is essential to improve the statistics and usage of the data on the natural capital stock and emphasize the value of ecosystem services, which should be highlighted during the process of boosting productivity.

Lastly, steps should be taken to strengthen international cooperation and create an external environment that contributes to shared prosperity. We should promote trade integration, facilitate cross-border investment and other relevant reforms, and maintain a transparent, non-discriminatory, open, and comprehensive multilateral trading system based on rules and regulations that will be beneficial for encouraging investment and technology transfer and promoting the integration of global value chains to achieve the potential for improving productivity.
_____